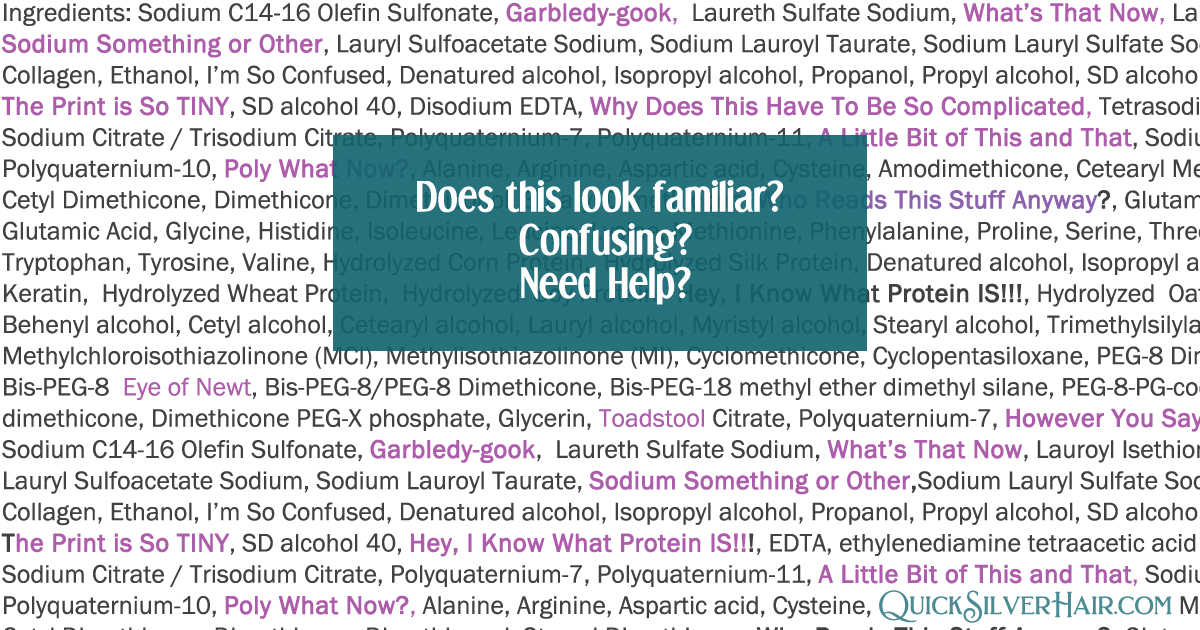 A handy list of commonly referred to hair ingredients, which to avoid, which are fine, and which to use with caution for drying out hair, curl disrupting, buildup causing, or allergy inducing.

Learn to read your labels, often when you are struggling with your hair it is a sneaky ingredient. If you don’t want to read the label or don’t fully understand the ingredients, you can run it through an ingredient checker, my favorite: Is It CG?

Bad alcohols are drying alcohols, and are used to help product dry faster so your style sets quickly…think hair spray. Which means your hair also gets zapped of moisture in this quick dry ingredient on top.

Good alcohols are derived from fatty acids; they provide moisture and are used as conditioning agents.

While chelating ingredients are amazing for removing hard water minerals, they are extremely drying always follow with silicone-free deep conditioning.

The itchy m’s are not an ingredient that causes buildup but are two ingredients that cause allergic reactions…mainly itching, thus their nickname. They are preservatives used to combat bacteria, fungi, and yeast in hair products. You will usually find them toward the end of the product list. For most they pose no issue but if your scalp itches, check for these two culprits.

They do not generally cause buildup alone but if they are combined with other ingredients that cause buildup like heavy oils and butters or silicones they will contribute.

(The list of polyquats is very long, the number at the end of a polyquat does not delineate any chemical formulation, only when the chemical was created, they are in order from 1 on…)

(Use According to Your Hair Type)

Proteins provide strength, they can rebuild the hair shaft (temporarily when it has been damaged by bleach and is in the high porosity category), and some are even film forming providing moisture for the hair.

Any ingredient preceded with “Hydrolyzed” and followed by “Protein” is a protein. Hydrolyzed means it has been molecularly broken down into smaller particles so that is available to the hair cuticle. Other proteins can be listed as amino acids and peptides. Not all proteins are the same size even when they are hydrolyzed, so you have larger proteins (great for high porosity hair and smaller proteins great for low porosity or fine hair.

Collagen is a mix of amino acids. It is a hydrating protein. It has it’s own set of small to large proteins derived from it: collagen being the whole molecule, hydrolyzed collagen, gelatin, and collagen amino acids (the smallest).

Quinoa is complete protein meaning it contains all 8 of the essential amino acids. Which means it contains these amino acids: histidine, isoleucine, leucine, lysine, methionine, phenylalanine, threonine, tryptophan and valine.

Amino Acids are not a protein on their own; they are individual components and building blocks of a complete protein:

Sometimes there will be an L- before the amino acid.