Should You Ditch the Dye Because of Cancer Risk?

Recently an article went blazing across the internet from Fast Company with a catchy clickbait heading “A harrowing study of 46,000 women shows hair dyes are heavily associated with cancer”, nothing will scare the dye right off your head faster than that. Trouble is it isn’t that simple, nor that harrowing. Depending on the source, it is estimated around 30% of all women over the age of 18, use hair dye regularly and an estimated 12% of all women will be diagnosed with breast cancer. So should we all be ditching the dye?

Let’s Take a Look at the Actual Numbers in the Study Published in the International Journal of Cancer:

A Few More Stats to Put Things In Perspective:

The Bottom Line of The Data Collected in These Questionnaires:

However, because this was an observational study, there is no data to prove causation. There are so many variables like social status, cultural norms, duration of usage, type of products and their ingredients, home or professional application, and this study was women who had a sister with breast cancer, that leaves a multitude of other women and men who use dye and have no family history of cancers. [5]

The study also asked other questions (which are not mentioned in the viral posts) related to education level, smoking, obesity, age at onset of periods and menopause, birth control use, number of pregnancies, and some of these were overlapping with using permanent dye. [1]

Other Studies on Hair Dye and Cancer:

Previous studies in the 1970’s found aromatic amines (which were in hair dye) to cause cancer in lab animals, those chemicals were removed from hair dye. One study found a consistent increase of bladder cancer in those who work with dyes. The results of studies involving cancers like leukemias, lymphomas, breast cancers and other types of cancers have seen inconsistent outcomes and inconclusive results. [6]

My Informal Poll on Dye and Cancer:

I ran my own informal poll in a Facebook group for silver hair with 10,000 members. While 10,000 members did not participate in the poll, of those that did these are the numbers.

In the comments section, it was discussed by several women that they knew hair stylists that had died of bladder, stomach, and breast cancers, and several stylists who had chemical sensitivities pop up during their careers. The women who discussed having been diagnosed with cancers of any kind and who dyed their hair had uterine, skin, breast, thyroid, colon, and kidney or bladder cancers.

The Elephant in the Room:

Saying “dye” causes cancer is like saying “cars” cause cancer…which component is it exactly that causes cancer?

There are thousands of chemicals used to make hair dye and thousands of brands of dye. Yet another variable is that straighteners were also in this study and some of the newer straighteners contain formaldehyde which does pose a cancer risk all on its own.

The fact is if you are a woman who is aging, you are at risk for breast cancer. After that and genetics, the more concerning things that put you at the highest risk for breast cancer are smoking, obesity, diet, exercise, where you live and what pollutants you are exposed to on the daily. All of the latter you have control over.

So Should You Ditch the Dye Because of Cancer Risk?

For me this proved one thing: chemicals are associated with cancer, which we already knew. This Sister Study should be a precursor to more studies that actually find correlations between the 5,000+ chemicals used in permanent dye and cancer cells. This study should be an alarming warning to manufactures, the FDA, and hair professionals that we need real information about what is being made, sold, handled and applied to our scalps for an hour or more at a time.

Although I’m not a scientist or a doctor, I do hope this eased the fears that a viral post without all the facts sent spiraling through the Universe. It is easy to be afraid, but education and knowledge will always ease the fears and anxiety. 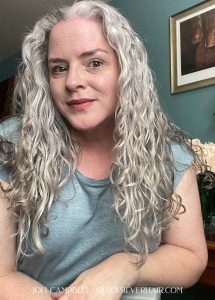 I hope you found this post educational and helpful. 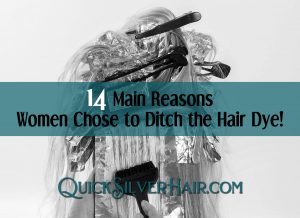 ← The Ultimate Guide to Hair Porosity: Does it really matter? How to Avoid the "Ugly Phase" of Transitioning to Gray Hair →

QuickSilverHair is a participant in the Amazon Services LLC Associates Program. Some of the links on this site are affiliate links to Amazon.com. I earn money as an Amazon Associate from qualifying purchases.

QuickSilverHair is an affiliate with the following brands, I earn a small percentage from any qualifying purchases, at no additional cost to you.

© Copyright disclaimer: All content is written by Joli A. Campbell or Guests, that content belongs to QuickSilverHair or the respected author. All Images in this blog belong to the women in the picture, myself, or were used with purchase or commercial permissions. I have used their images and names with their permission. Please do not copy or redistribute anything from this site without further permission. Thank you.

QuickSilverHair.com content disclaimer: content is provided for general information purposes and should not be considered medical advice. Product information is not intended to diagnose, treat, cure or prevent any disease. The hair care content is also for educational use, I am not a hair care professional or dermatologist, please be careful with your hair and skin. If you have any hesitations or concerns speak to your doctor or hair care professional for their support before using any information you find on this site. Be well.